“Even now, there is a dearth of environmental nonfiction about the places where most of us live: cities and suburbs.” 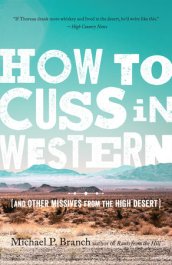 Lawns: those little, curated patches of green earth that act as the cosmetic faces of suburbia. So many of us have them. So many, in fact, that in an essay titled “Lawn Guilt,” Michael P. Branch, author of Rants from the Hill and How to Cuss in Western, says that these “little” patches actually cover over 21 million acres of land in the United States and require over 9 billion gallons of water per day to maintain. And we, being the teeny-earth manicurists that we are, spend a collective 3 billion hours pushing our gas-guzzling lawnmowers from one end to the other.

Branch discussed this, and many more thought-fertilizing tidbits during Nonfiction Now, which had a terrific panel of writers in the subgenre of environmental writing, “Sub/urban,” which brought a naturalist perspective to big cities, suburbs, and towns: think John Burroughs, if he was born in Manhattan rather than the Catskills. This is what Amy Benson, Michael P. Branch, Lisa Couturier, Taylor Brorby, and Nick Neely brought to the table. It’s such an important branch of nonfiction because it exposes the sheer fragility of our environment and our need to protect it.

As Nick Neely, author of Coast Range: A Collection from the Pacific Edge, noted, 80% of the U.S. population lives in major cities. With a stat like that, it’s wild that environmental writing has just now begun to grow within, and about, the ecology of cities.

“I attempt to peel back layers in space and time to show the array of inhabitants of the coast range.”   Nick Neely

For anyone interested in creative Sub/urban environmental writing, these authors’ works are a great place to start. Lisa Couturier’s background in poetry suffuses her collection of essays, The Hopes of Snakes, as she explores the lives of the various animals she observes in her New York City neighborhood. Taylor Brorby, an award-winning essayist and environmentalist, exposes the detrimental impact of modern industrial practices in his diverse essays and his newly released book of poetry, Crude: Poems About Place, Energy, and Politics. And Amy Benson, winner of the 2016 Dzanc Books Nonfiction Prize for Seven Years to Zero: Sketches of Art in the Anthropocene, draws from her own life and that of the landscapes of modern art.

Sub/urban environmental writing is not simply blurry-eyed nostalgia for a greener past, spewing anger for a potentially bleak future, or ruminating guiltily over our less-than-conscientious, human activities. It can be humorous, charming, and contemporary. And these five, accomplished authors and activists are calling all writers to action.

← The Hermit Crab Essay: Brenda Miller Unshells her Own
→ Decolonizing Nonfiction: What it Means to Write in an ‘American Invention’
Loading Comments...