Katie Quinnelly is a poet from West Virginia, where she is also a climbing instructor.  Her chapbook, Sparrow Pie, is the winner of Eggtooth Edition’s 2017/2018 chapbook competition. Thin Air’s Addyson Santese spoke to Quinnelley about her award-winning chapbook, writing about Appalachia, and how it feels to publish work about people you love.

Sparrow Pie is almost deceptively alluring in its quaintness, from the title to the colorful, collaged cover art (provided by Sarah Quinnelly) of mountains and trains. Is this, in some ways, reflective of the West Virginia landscape?

Yes, “alluring in its quaintness” does reflect the landscape of West Virginia, but I think the only deception was created by me. West Virginia’s landscape isn’t really covering its scars from its pain, which I guess would be mostly mountaintop removal and other forms of mining. I might be hiding mine sometimes.

West Virginia has a well-known but frequently overlooked history of poverty, drug abuse, and high suicide rates. All of these elements make an appearance in Sparrow Pie and provide a dark sense of regionalism. What motivates you to tell these gritty stories? Do you think they are representative of the majority of West Virginia residents?

I’m only motivated by my own experiences. The history of poverty, drug abuse, and high suicide rates no doubt has impacted a lot of others. I’m not the only one. But to say it’s representative of the majority is problematic…. That’s just a touchy subject right now, anyway.

There’s a book by J.D. Vance called Hillbilly Elegy that depicts Appalachia in this way, in the dark way, based on Vance’s own experiences. And recently, historian Elizabeth Catte bounced back with her book What You Are Getting Wrong About Appalachia to say, basically, that we aren’t just a bunch of broken people, and we’re trying really hard down here, and if people keep thinking of us in this way, the way they read about it in Hillbilly Elegy, with their generalizations, then we don’t have a chance. A friend (or enemy, I haven’t decided yet) of mine once heard this quote, and used it during discussions often, and I think it applies here, from some people in Appalachia to outsiders: “I hate what you think about my life.”

Anyway, both books are worth reading, and no one narrative is ever true for an entire region, of course … but I don’t want to say that my story is the story of Appalachia. Sparrow Pie is only my story, and my family’s, and if anyone wants to read it, let it be known that I’m very happy here, and that writing for me is an outlet, not a reflection of the region. If my book is political in any way, it’s unintentional.

The poems not written in first-person narration are the ones that ask some questions or make some statements that I wanted to be distanced from when I wrote the pieces originally. Later, when I compiled the pieces for a manuscript, I didn’t change them, because it seemed to work.

Your work seems to focus on one of the largest and perhaps most incomprehensible concepts: death. From the decay of the Appalachian Mountains to a miscarriage, it is a pervasive presence in each piece. How did examining such a complex topic in a prismatic manner develop your understanding of death or provide a sense of closure, if at all?

Well, in some ways it didn’t provide closure. I wrote the first piece in Sparrow Pie, “The Naming,” because there were times that creating a physical form of my pain only made it more powerful.

Sometimes the pain disappears after I write about death, but I don’t like it at all, when that happens. I would rather it not be understood. When I wrote the titular piece “Sparrow Pie” I had been haunted by the birds in the cage, and I didn’t know how to feel about Marcus, because I thought he was a monster. Then after I wrote it down he became a tragic character in a poem, and therefore fictionalized to me, and I didn’t feel anything anymore when I looked at the sparrow trap or the dead birds. Now maybe I’m a monster. 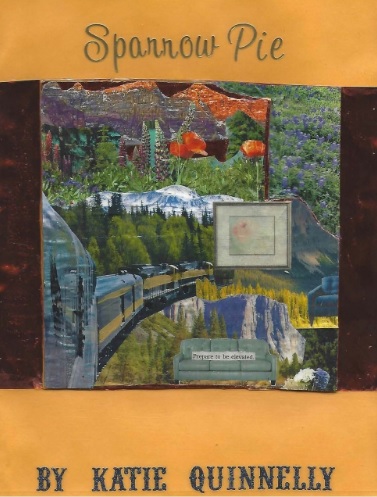 Similarly, when I wrote “Annie,” I had been wrestling with the image of my mom walking through the horse pasture looking for my little sister after they found the suicide note, but no body. Now when I think about that scene, it has a fantastical element–a woman turning into a horse–and I just think of this as a creation of my imagination, like it never really happened at all. I don’t feel anything anymore. Well, except a sort of concern for the loss of empathy. I don’t know how to come to terms with that.

There is an immense sense of loss in your work, particularly concerning your siblings. For many, writing about people seems to be a way to keep them, to hold them in existence. Instead of choosing to highlight particularly fond moments, however, you bring almost entirely melancholic, embarrassing, and weird memories to the page in vivid detail. How does writing these stories in such a morbid way help you hold on to these individuals?

I felt a lot of guilt around having the stories be so embarrassing, and I had some publishing remorse when I found out I was the winner of the Eggtooth Editions contest. I was horrified that I was being congratulated for exposing people I love. I still feel this way and I don’t know if it will pass or if I won’t write like that anymore. I asked my older sister, the one who designed the cover for the book, what she thought about those feelings, and she said I shouldn’t censor myself. Then I read this line in Clarice LiSpector’s book The Hour of the Star, where the narrator is also struggling with his guilt as a writer exposing this woman in all of her private moments. He says: “…it’s my obligation to tell about this one girl out of the thousands like her. And my duty, however artlessly, to reveal her life. / Because there’s the right to scream. / So I scream.”

So, yeah. I’m not sure if that answered the question about holding onto them, because I’m not sure that’s the function of the pieces, but I really wanted to address the question, Why embarrass them? and I don’t have a good reason.

Guilt is practically its own character in your work; it stalks people and shows up at unexpected times in unexpected ways. Does writing provide an escape from this guilt or serve to complicate the feeling?

Similar to the concept of coping with death through writing, I do not think writing provides an escape from the guilt, but probably enhances it, or gives it a physical body to walk around in, and that scares me. It’s more vulnerable, though, which is hopeful. I think after a button is touched so many times eventually it’ll stop responding, and I might be trying to burn out my guilt-button by pressing it over and over.

The line between poetry and prose is expertly blurred in each piece. Are there any hybrid writers who have inspired your own writing style? What is it that draws you to this form?

I love James Pate’s collection The Fassbinder Diaries because it blurs the lines not only for poetry and prose, but also it’s about a film director while not really being about the films at all, and it’s grounded while also being magical. I think it even has a soundtrack, or maybe that was just in my head. This book kind of let me know that the blurry genre was an option. Now I read and write a lot of short fiction, but the pieces in Sparrow Pie just needed to be as confusing and hybrid as the topics they carry.