Nostalgia for the Present: An Interview with Jared Harél

In his award-winning debut poetry collection Go Because I Love You, Jared Harél dives into themes of nostalgia, childhood, parenting and the trauma of the past. His writing is sometimes matter-of-fact and sometimes surreal, giving insights into what it means to be father and husband, the legacies of past and present, and how we navigate a world where every story seems to have a story of its own. Thin Air’s Michael Buckius reached out to ask a few questions about his book. 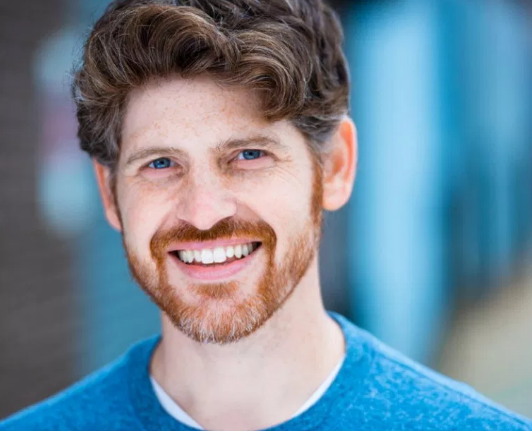 The first poem of your new collection is “Go So You Can Come Back.” In it, there is a reference to the poem “Autumn Begins in Martins Ferry, Ohio” by James Wright. Why does his poem speak to you?

First off, thank you for taking the time to read and think about these poems. Much appreciated!

One of the big themes in my collection, Go Because I Love You is this idea of arrivals and departures, about the ways we come together and pull apart. In Wright’s poem, he describes this desperate and lonely blue-collar town where “All the proud fathers are ashamed to go home” and there’s this profound desire for physical contact, even if it’s the brutal, violent kind. In the poem’s final stanza, the football-playing sons “gallop terribly against each other’s bodies,” an ending I’ve always found both sad and beautiful. It is the clearest, most concrete way for this community to come together. In any case, I wrote the first draft for “Go So You Can Come Back” very quickly, but remember thinking about the ways in which my wife and I are often missing one another, moving towards and away, leaving and returning. Wright’s poem popped into my head, and it seemed like a natural fit.

After reading the poem “The Lives of Ex-Girlfriends,” I began to think about my ex-girlfriends and I realized that the older the past relationship was, the less nostalgic I felt about it. Do you think that it’s possible to completely escape feelings of nostalgia or will it always be there to some degree? How do you manage nostalgia in your poetry?

I’ll admit that I am a pretty nostalgic person. I’m big into making photo albums and collecting stuff I’ll never need or use again. In high school, one reason I began writing poems was to mark time and make something last. Very dramatic of my sixteen-year-old self, I know. These days, as a parent to small children, I even get nostalgic for the present, for life as it happens. That being said, I view “The Lives of Ex-Girlfriends” as a poem that fights that nostalgic impulse in myself. Most of my past relationships didn’t work out for good reason. It’s tempting to remember only the good times, but it’s also a bit dangerous. Ultimately, I view “The Lives…” as a love poem to my wife, to that which is real and good. Still, my father-in-law isn’t a fan of that particular poem.

Several poems in the collection deal with themes of trauma, both personal and ancestral. On a personal level, what is your experience with trauma that has been passed to you from previous generations versus trauma that you have experienced firsthand? How do you distinguish between the two when you write?

That’s an issue I haven’t quite settled in my life, let alone in my writing. I do know that being the grandchild of Holocaust survivors tends to make me feel very lucky and guilty at once, and that these feelings of gratitude and guilt are present in my poems. Certainly, a trauma of that magnitude is passed down, to some degree, from generation to generation. I know my mother, being the child of survivors, always felt immense pressure to be a perfect daughter. She wanted to prevent her parents from ever suffering again. How all this makes its way into my writing is not entirely clear to me, which I’m okay with, by the way. I find that strong work often arises out of not knowing, from questions more than answers.

One of my favorite poems in this collection is “The Process.” For me, it is humorous and descriptive but also speaks to something much deeper—how the past is always with us whether we like it or not. I like how, in your poem, the past actually becomes a physical object that leaves a trail of destruction in its wake: “How one day, I’ll look back, to find display cases shattered, aisles destroyed, polite smiles, of the recently thwacked.” How does this poem’s relationship with the past differ from the collective pasts in your other poems?

Thanks so much. When I wrote “The Process,” I was thinking about past lives and past decisions: how our choices shape us mentally, but also physically. If I eat tons of ice cream, I’ll get fatter, etc. I had written a poem entitled “The Past” which spoke to the more fluid, murky nature of both personal and collective history, so with “The Process” I tried doing the opposite, to write about the past as a physical entity, an appendage, a wrecking ball of sorts. Now that I think about it, this might be an anti-nostalgia poem as well. The speaker comes to the realization that he’s spent years fretting over and preserving the past, but now it’s physically attached to him. He cannot escape it.

The poem “Local News” includes the passage “we swiped a broad-axe from your dad’s tool shed, and swore we’d seen a murderer or bear, stalking the dark coil of woods, behind our school” It made me think about my childhood, specifically about the small forest that was behind my elementary school. The rumor around school was that they had found a dead body there and that the perpetrator was a man with an ax who still haunted the woods. We would go up to the fence that separated the school grounds from the trees to try and catch a glimpse of a man through the branches and to listen for chopping sounds. Why do you think some children purposefully seek out the darker side of the world around them?

Yeah, that childhood forest of yours sounds very familiar. Growing up in 1990’s suburbia, there was this assumed safety which I found unsettling. The stakes felt high. The world struck me as a dark and terrifying place, yet I had no tangible proof of this. So my friends and I went looking for that proof. It seems like your group of friends did the same. I think of writers like Stephen King and Tana French who have made careers mining the fears of middle-class suburbia. On one hand, I think most teenagers are allergic to feelings of privilege and gratitude. Then again, what with routine school shootings and opioid epidemics and so on, the years have unfortunately proven our past selves right. That illusion of safety was just that: an illusion.

Jared Harél is the author of Go Because I Love You (Diode Editions, 2018). He’s been awarded the ‘Stanley Kunitz Memorial Prize’ from American Poetry Review, the ‘William Matthews Poetry Prize’ from Asheville Poetry Review, and an ‘Individual Artist Grant’ from Queens Council on the Arts. His poems have appeared in such journals as Tin House, The Threepenny Review, The Southern Review, Massachusetts Review, Poetry Daily, Bennington Review and 32 Poems. His narrative long-poem, The Body Double, was published by Brooklyn Arts Press. Harél plays drums for the rock-band Flyin’ J & The Ghostrobber, and lives in Queens, NY with his wife and two kids.

← Three Poems by Savannah Slone
→ Lands Shift and So Should Poems: An Interview with Jake Skeets

3 responses to “Nostalgia for the Present: An Interview with Jared Harél”